The prompt word(s) for today are, Birds Eye View. I know where I’m going with this prompt and it’s not pretty. I’ve just popped a feather photograph in to give me a bit of visual integrity.

For my generation Birds Eye is forever associated with a brand of freezer convenience foods. The most iconic of which is probably the fish finger but the one I have a photograph of is The Arctic Roll. 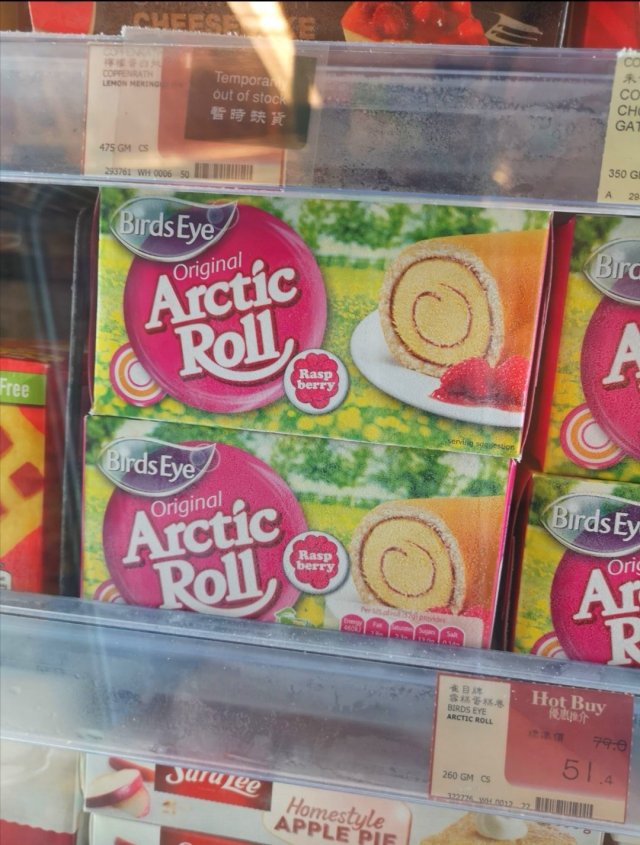 This would have been a familiar sight in British supermarkets and homes in the Seventies or Eighties. Less so now, this photo was taken in Hong Kong recently where it is clearly very popular. Arctic Roll in Britain has become a bit of a home chef thing . Googling it brings up recipes quicker than it does the Birds Eye version. For those unfamiliar with either the Birds Eye Version or the posher one, Arctic Roll is Vanilla ice cream enrobed with thin sponge and raspberry jam served, unsurprisingly, in a roll shape. It was invented by Dr Ernest Velden in the 1950’s he mass produced it in a factory in Eastbourne from 1968

Birds Eye marketed the product for 30 years until sales slumped in the 1990’s when they stopped production. This coincided with a resurgence in British coooking and increased interest in good quality restaurant food. Beloved by many the Arctic Roll is considered a nostalgia food, which is why the cheap family desert transformed into a desert made by aspiring chefs.

In 2008 during an economic downturn Birds Eye started production up again, firstly because it is still cheap to produce but also because in difficult times people like to return to comfort foods. The world’s Pandemic of 2020 has probably also been very good for sales

I have never been a fan, it’s a texture thing. It seems almost disrespectful to admit this but I am not alone, Nigel Slater, a television cook and food critic ,who I admire, says it tastes like carpet. Perhaps a chef’s version should be my next project.

Better still an informal supper with Nigel Slater where he serves a sublime version would be perfection.