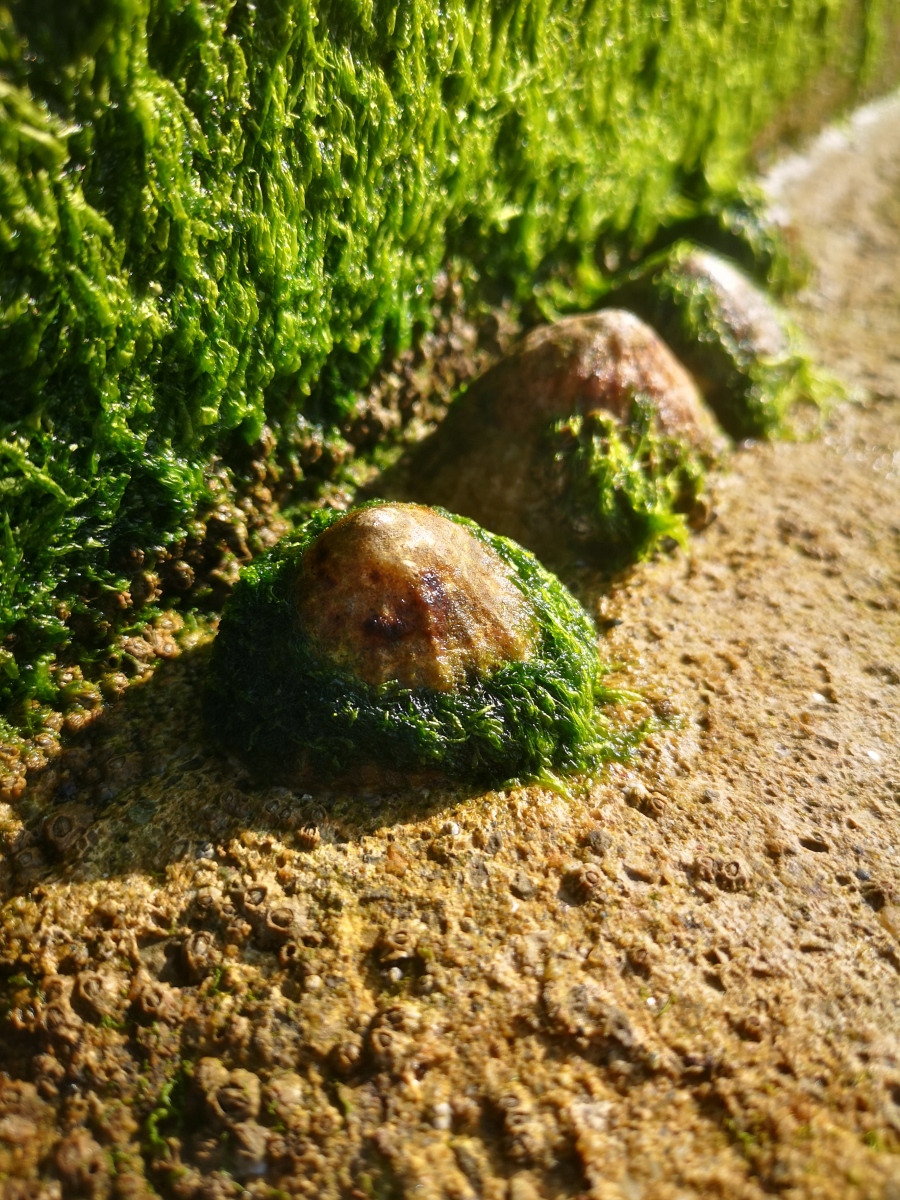 A shameless dogblog. Low tide this morning and an empty beach gave the dogs a rare chance to scamper on the beach. Lola is perfectly camouflaged on her new local beach.

Hugo, of course, would only be camouflaged at pure white tropical beaches, which are not local to us.

It’s not only our swimming hobby that stops them visiting the beach often. They have very low respect for other people’s activities. The peaceful activities of strangers are their main interest, book reading or yoga are activities to step away from the hurly burly of regular life. Neither experience is enhanced by a furry nose and whiskers snuffling extremities, however unthreatening the intention.

They also snuffle limpets who do not react.

The bright sunlight of Sunday turned this blog into a riot of blue and green. Starting at 8 am with vivid seaweed.

From the exact same location I could turn around to show you the sillouettes of the trees that were trimmed last week.

Its not only the trees that got a trim this week. Hannah also got a haircut this week so we are 25% tidy @theoldmortuary as Hugo and Lola can look pretty shaggy after only 4 weeks away from their salon visits.

The post swim dash to breakfast took us past this Ceanothus and this gorgeous door.

After a morning spent on human pursuits the dogos waited patiently for their turn, with a bit of a blue background.

A dog walk on a slightly different part of the coast found one more blue and green image.

So here we are, its Monday again.

Lets start the week with a splash!

So a late start for the blog but with the added bonus of some dog pictures. The stand out feature of this weekend has been the wind. A very brisk Easterly blowing into Plymouth Sound affecting everything weve done. Al Fresco Dining, Bobbing, and dog walking. Nothing I’ve produced photographically has shown the severity of the wind. Anecdotally Miss Lola was blown off her legs yesterday. A situation only remedied by a very tight cuddle. The swimming lesson outing required the van to keep Miss Lola on board and in a good mood.

Hugo was also not averse to a bit of van comfort while swimming lessons were affecting the quality of his Sunday morning.

Some outdoor activity was permitted in the morning schedule. Lola agreed to a pose that demonstrated the wind direction.

The most important part of the day was guarding the beach awaiting the return of the swimmers.

Today we need to talk about Fox.

Our dogs spent their formative years living in South London. We quickly became aware of dogs ernest desire to always roll in Fox Poo. Urban foxes are everywhere and dog owners have a sixth sense about the moment their dogs bend one shoulder down towards the earth prior to a squirm of ecstacy as they rub fox excrement over their backs and onto their faces. Once we returned to Cornwall we lost that sixth sense. Rural foxes are far more discrete and many small town or country people have never seen a live fox.

In London Foxes were a part of our everyday lives. We often woke up with one.

They used our garage roof as a relaxation area and for a memorable and stinky period our garden became their larder. If foxes have a really rich harvesting and hunting period they will store excess food in a particular place to retrieve it later. Our garden, for a while became a dead rat larder. We could smell them as soon as we walked into the garden. We disposed of the stinky carcasses into an area of rough ground that was near the foxes den, only to have the exact same bodies returned to the garden a few hours later. Apparently no self respecting Fox wants such things close to its front door!

Pandemic Pondering #319 mentions the mud festival that was yesterdays walk. Hugo and Lola had made some small attempt to clean themselves up so they were spared a bath yesterday. Today though a trip to the Rugby Club for a run about revealed how much I have lost my London Fox awareness training. First Hugo and then Lola took the dive of shame into a copious pile of Fox poo. I could hope for a moment that it was just random high spirits but as they ran excitedly back to me the joy on their faces told me all I needed to know. I bent down for a sniff but it was unnecessary really.

An afternoon bath became essential, as you can see from these photos it was not universally popular.

The rewards for me are clean curls to cuddle and a slightly damp lap.

Thermal underwear can make you do crazy things. Yesterday was a day of sunshine with a side order of mud.

Everywhere here is pretty sodden with rain and winteriness. Some regular dog walks have been abandoned because they are just too muddy. The arrival of unexpected sunshine coupled with thermal underwear made walking without a warm coat entirely possible. My choice of walk has a semi-permeable surface that drains well, all should have been well but the dogs did not stick to the path. Beyond the confines of the path the parkland was a riot of quagmire and fascinating smells. Some of which the dogs felt obliged to roll in.

It was such a sunny day , two circuits of the park were completed. I was feeling toasty but the dogs were two muddy sponges, filled to capacity with moisture and mud. The ecstatic cuddles when we returned to the car were a mixed blessing.

The second walk of the day involved Tarmac and water contained in its proper place. 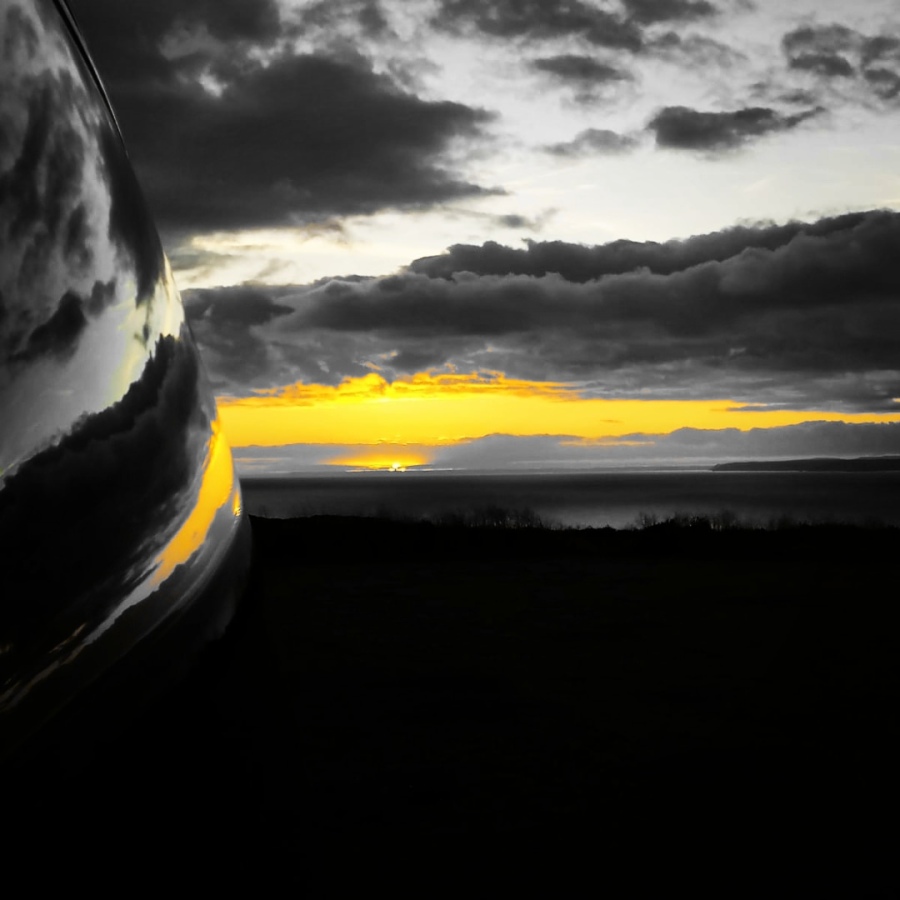 Warping Sunset. Sunset at Rame Head , on Sunday, was beautiful. It needed nothing to enhance it. So PP#252 presented sunset just as nature intended but the picture below, taken by Hannah on our return to the van, exploits nature and the benefits of having a clean bottom.

The clean bottom in question is our beloved VW Camper. It takes us to some amazing places.

Hugo and Lola love it because the chances of being in bed are greatly enhanced.

And they get to snuffle within spectacular scenery.

And when the day is done, exhausted by fresh air and long walks.

They can snuggle up together without the usual bickering.

The first Dahlia of the summer @theoldmortuary decided to pop open this morning. It’s a risky life in this garden as the slugs here are super tenacious nibblers and the 22 year old cat thinks sprouting dahlias are the perfect place to do her ablutions. Thankfully both slugs and the cat choose the dull dahlias as their victims and ignore the glamorous ones. By midday this one was trying really hard to be gorgeous.

But it’s tough being the first dahlia in a summer garden and it was soon heading off for an early sleep.

Sleep in daytime was a bit of a theme. An art group committee meeting was scheduled for the afternoon. Hugo was fully ready for some Zoom action this afternoon.

But just like the dahlia he chose early sleep over the excitement of Logo design and postponed exhibitions. 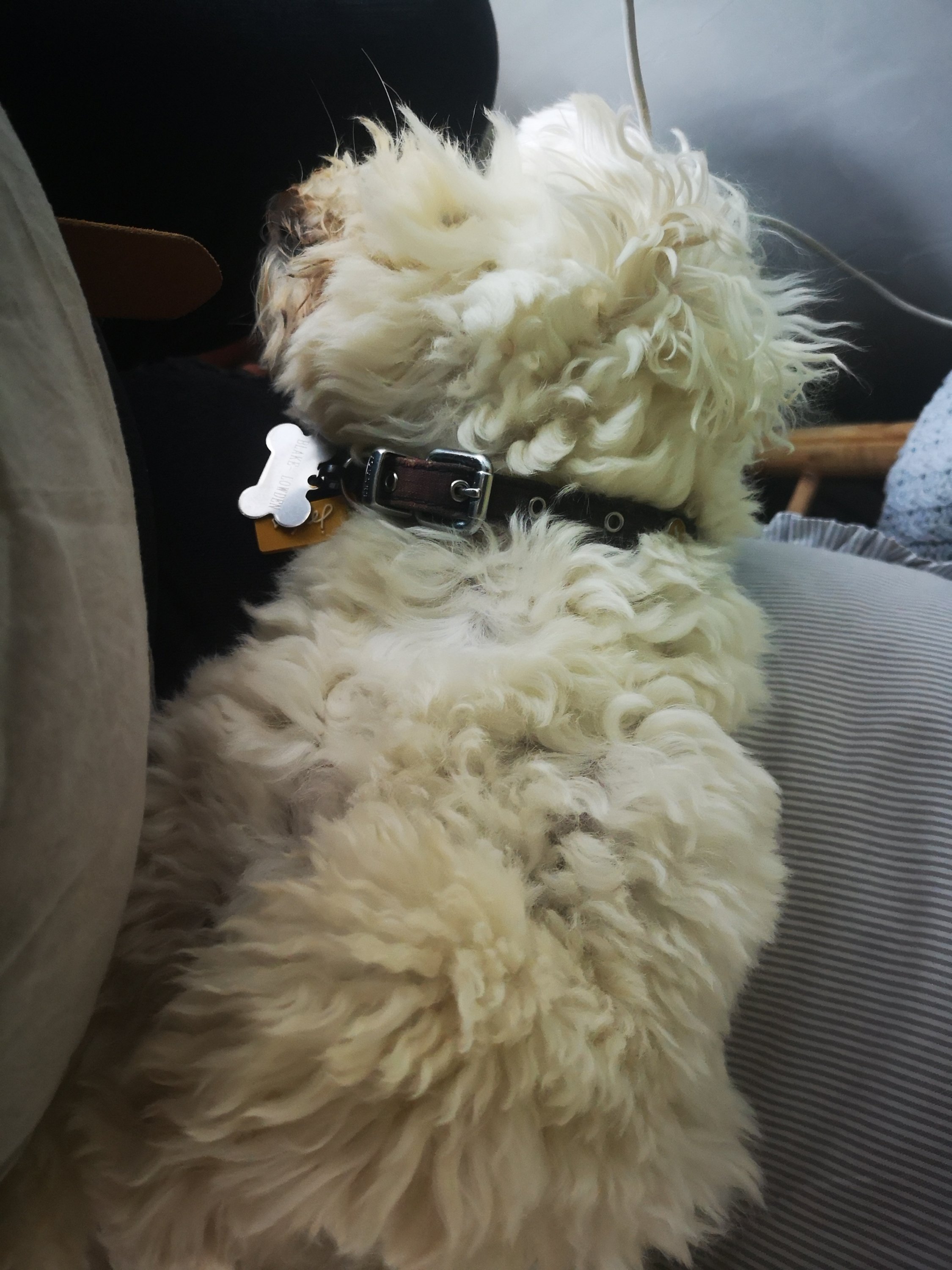 Making hay while the sun shines.

Rural chic is having a moment, probably inspired by any number of city dwellers who have managed to endure lockdown in the countryside.
https://www.theguardian.com/fashion/2020/jul/03/david-beckham-leads-the-way-as-men-flock-to-cottagecore-look

The nature reserve near us has cut and laid the hay ready for collecting. As a backdrop for fashion photography this location would be perfect.

It is a fabulous image of rural charm, as is the Guardian article about the decorative Mr Beckham.

My recollection of Hay making in my youth is that it is a dirty, dusty job that has been romanticised way beyond its reality. 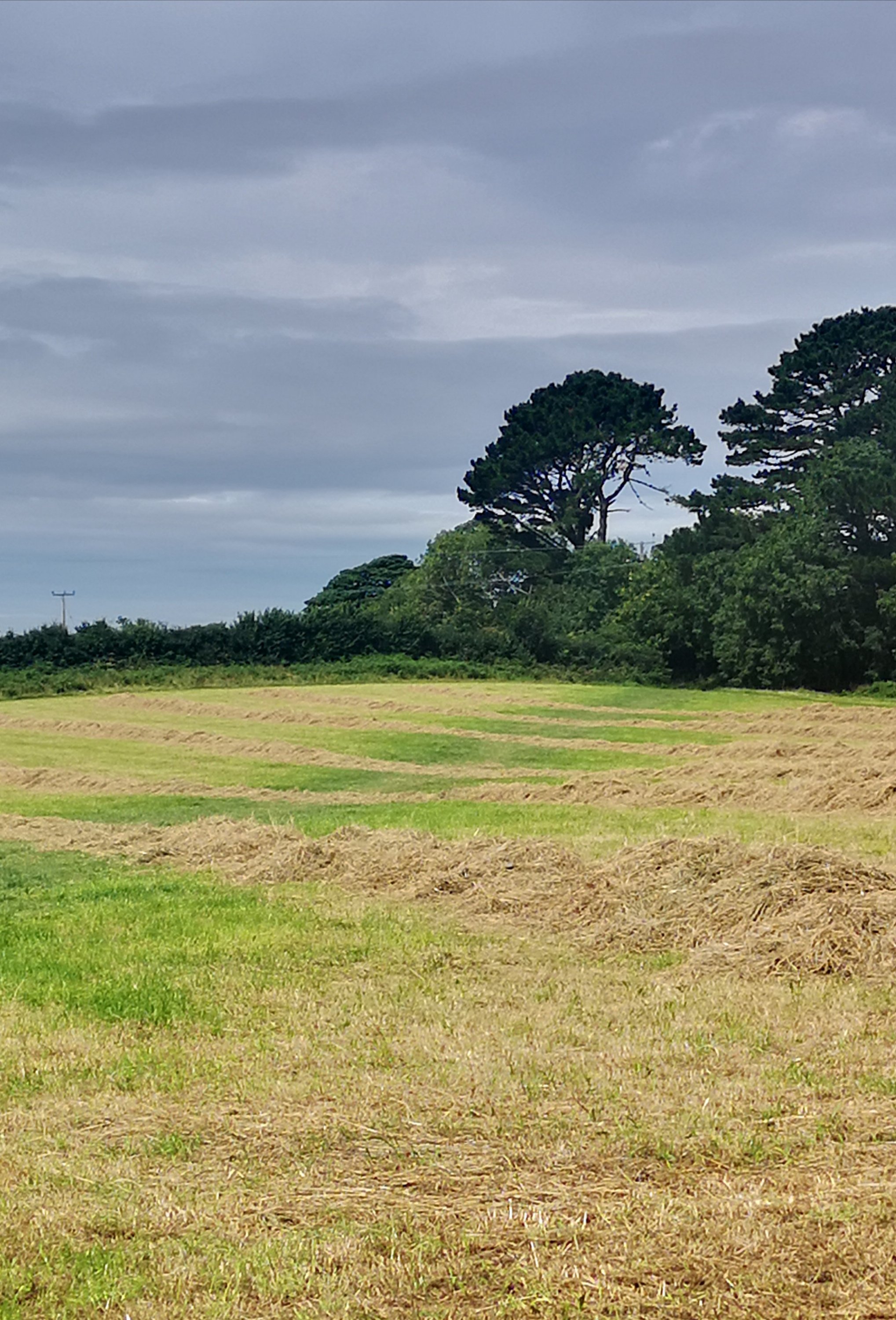 Literally or idiomatically, making hay while the sun shines was picturesque this morning.

To make the most of the idiomatic moment I can throw in two pictures of fluffy dogs making hay while the sun shines, one of them hay coloured.

Three weeks Lockdown done and at least three weeks more to go. Hugo and Lola have taken over the ponderings. Boop my nose, message on a mug, let’s sleep on it. 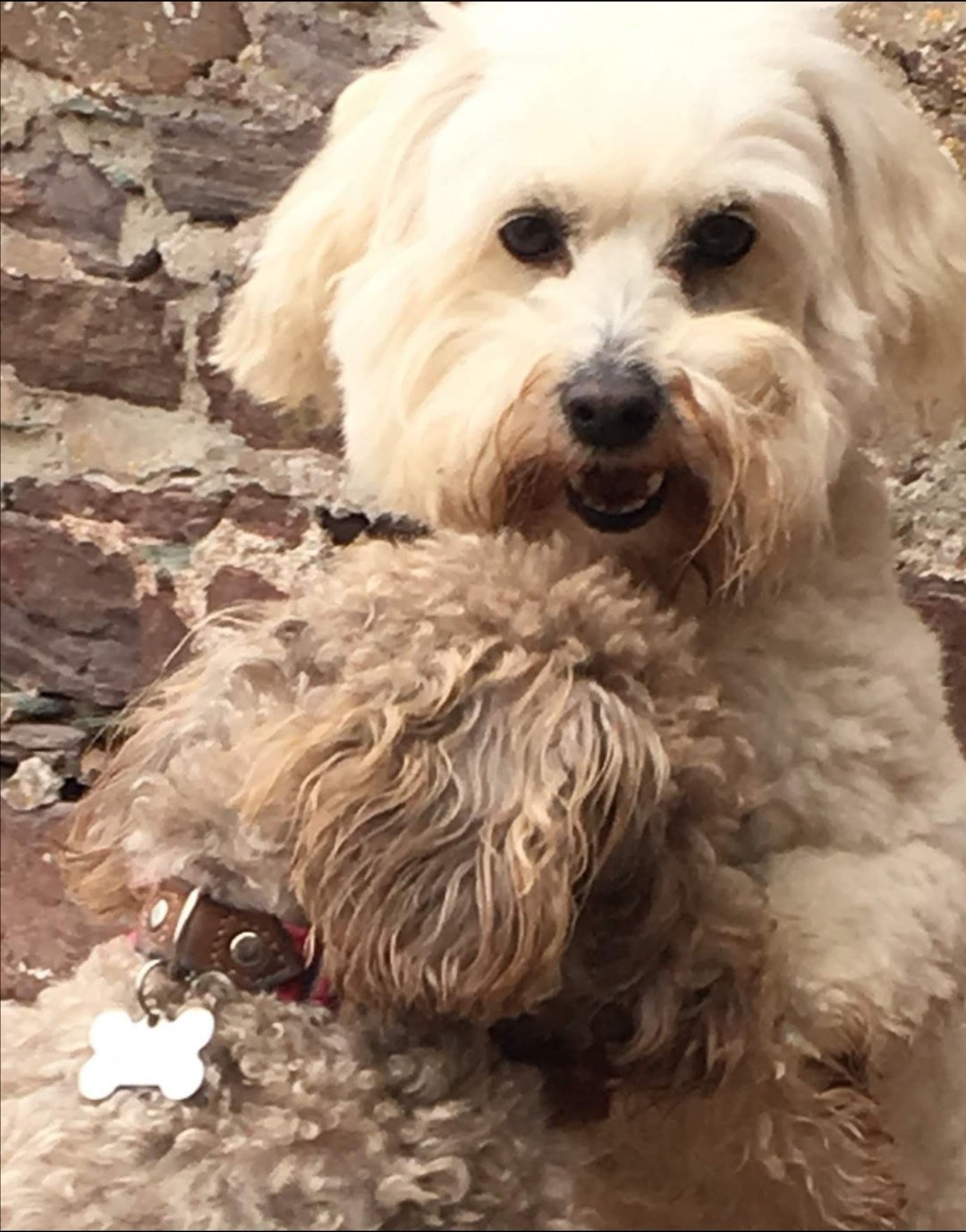 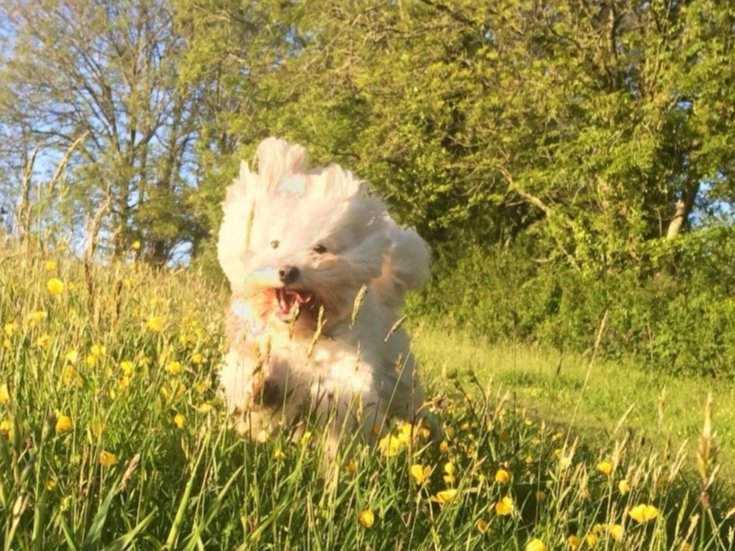 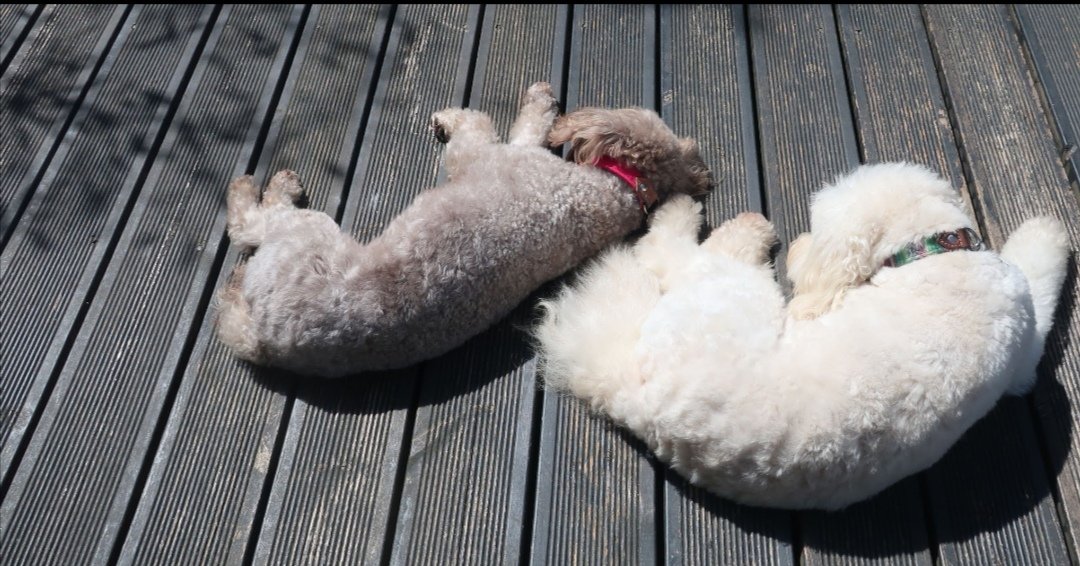 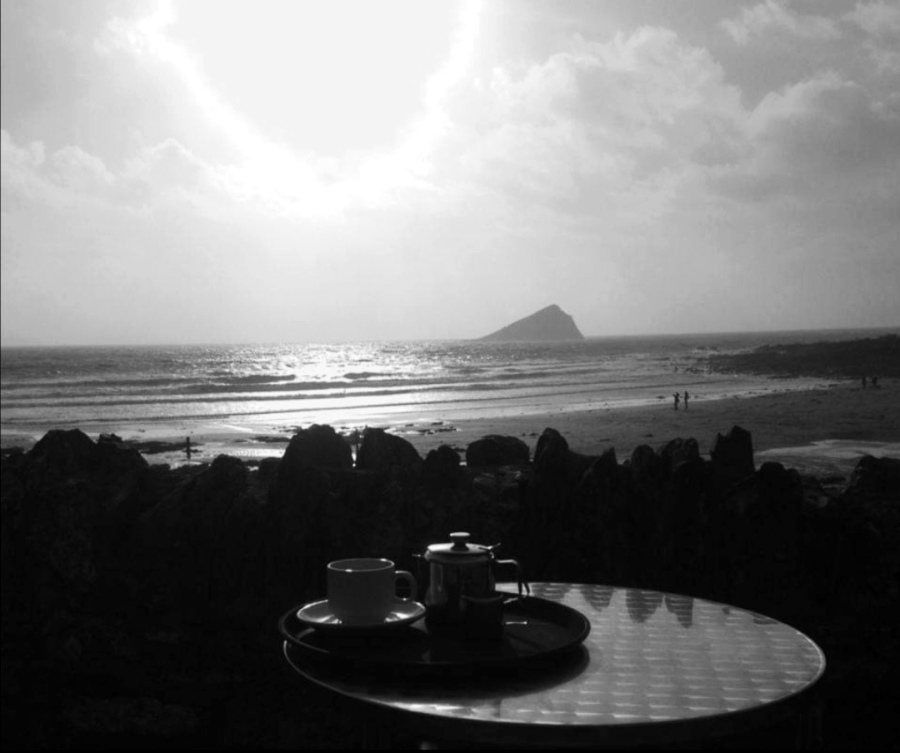 This picture is from a previous visit to Wembury when a cup of tea overlooking the sea was just every day life. Wembury was my destination yesterday. Hugo and Lola needed their regular hair cut at their dog groomers.
https://www.nataliesdoggrooming.co.uk/

Wembury is a regular visit for this exact reason.

The hours between dirty dog delivery and pampered pooch collection are spent doing Plymouth based jobs or enjoying the beach or coast. The charity shops of Modbury are also an irregular treat.

The beauty of Wembury beach is the sand. It doesn’t cling so even freshly clean dogs come off as clean as they went on it.

These shots make it look like we were the only people there. Nothing could be further from the truth, I would like to say we are really good at socially isolating but I think I just got lucky with photographs. It was pretty chilly so many people were hunkered down against the rocks with flasks of coffee. The coast path was probably very busy but that involves mud and we don’t do mud on grooming days.
https://www.nationaltrust.org.uk/

The National Trust giving free access to much of their land during the pandemic is very generous and public spirited . The car park was as full as on a hot summers day. Even after only 5 days of keeping ourselves isolated fresh air and a walk was like drinking fresh lemonade. 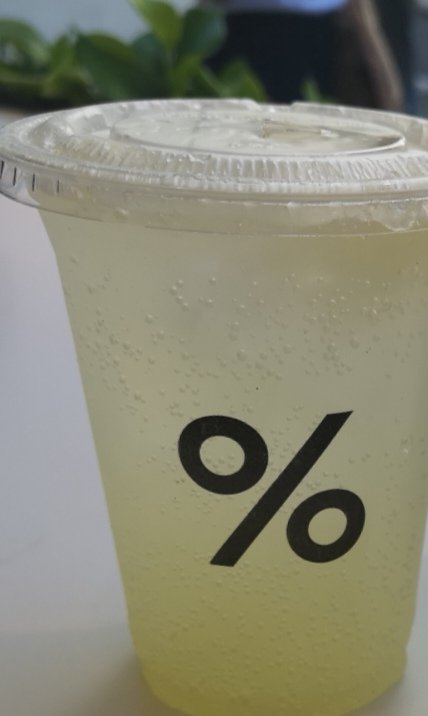