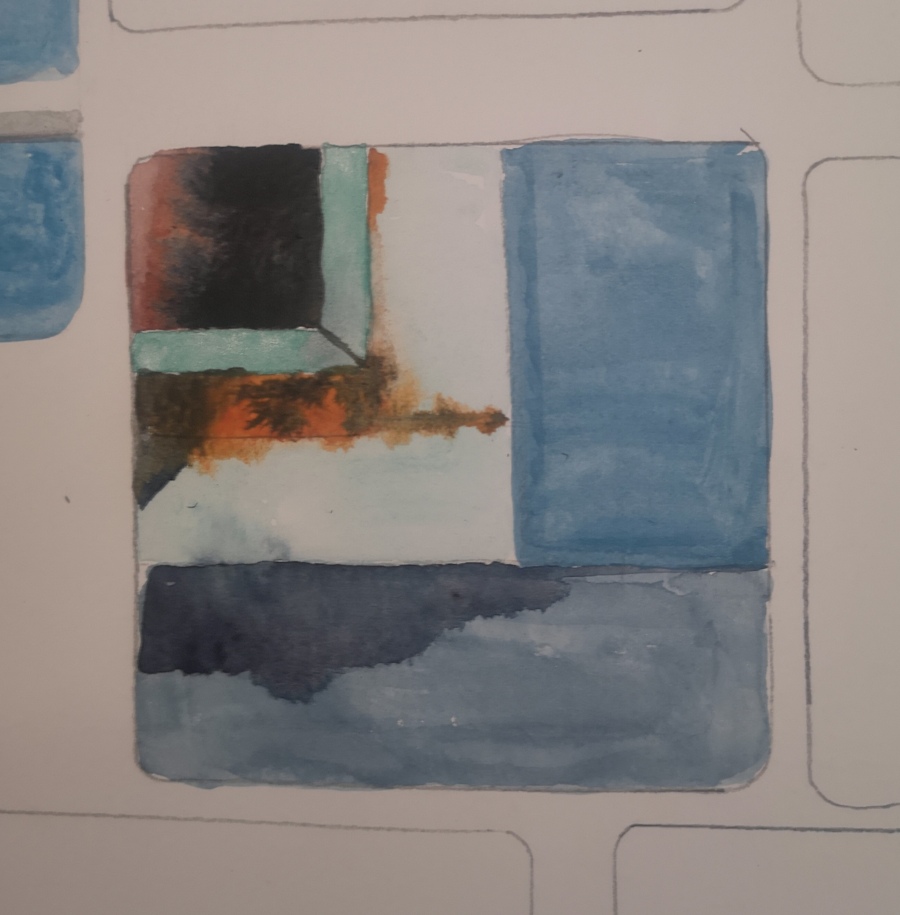 Another locally sourced colour square has been created today. This one is a corroded corner of a closed corner shop.

As I traverse the local streets it is very obvious that the time of day and weather conditions really affect the tiny colour snapshots that I take with my camera phone. The old corner shop catches the sun beautifully in the morning. The corner shop is fondly held in the heart of this community. When we moved here it was on the downward turn and did not immediately grab our attention and then just like that it was closed and then, not so long after, floral tributes and messages of condolence appeared. Rather incongruously a large sun hat with the words ‘ On Cloud Nine’ appeared.

Not having been part of a community that loses a much loved character and very popular shop there is a sense of dislocation and puzzlement at what we may have missed. Anecdotally I am aware that we missed a much loved shopkeeper called Ann. Everyone says what a wonderful person she was and what a hub of the community the shop was. There was definitely a sense that something locally important had been lost. The hat as an act of remembrance puzzled me. On Cloud Nine usually denotes someone who is extremely happy. Perhaps the hat was reflecting the character of the departed shopkeeper. Cloud nine is actually a very specific type of cloud. The etymology of Cloud Nine makes nothing clear.

The origin of sense 1 (“a state of bliss”) is uncertain; however, the following etymology has been suggested:

The first edition of the International Cloud Atlas (1896),[1] which defined ten types of cloud, described the ninth type as the cumulonimbus which rises to 10 km (6.2 miles), the highest a cloud can be.[2]
Compare cloud seven (“state of complete happiness or euphoria”),[3] which may have originated from confusion of cloud nine with seventh heaven.[2]

Sense 2 (“a state of fantastic or impractical dreaming or thinking”) may be due to a confusion between sense 1 and the phrase head in the clouds.

So, on this occasion, pondering has made me none the wiser. A sun hat embroidered with the words ‘ on cloud nine’ is a very unusual object to place as an act of remembrance on the steps of a closed corner shop. I suspect it will always remain a mystery to me, but I will ponder it often when I walk past.