This is the year of refreshing old skills. Sewing , like watercolour has been long abandoned. My mum was a brilliant seamstress and made fantastic clothes and costumes throughout the sixties and seventies. I learnt loads from her but never really used the skills and ended up just about competent to turn a hem. In time her wonderful, but heavy, 70’s Brother machine, found its way to the tip. A couple of years ago my ex- husband bought me a lightweight, new Brother. Nothing like as swanky as the old one, but how much tech do you need to turn up hems?

Sewing Bee came on the TV, originally, when I was still working stupid hours in London, then early this year it was announced that it would return in the late winter after a gap of a couple of years. No longer having erratic hours and on-call as an excuse, I enrolled on a sewing course to gain some Sewing Bee chutzpah.

https://www.makeat140.co.uk/ is a gorgeous fabric and sewing stuff store at the Royal William Yard. Lizzie Evans the happiest of haberdashers, ran a successful business from an old mortuary in the Barbican area of Plymouth. Old Mortuaries are a bit of a thing around here, there’s us, Lizzies previous incarnation, a bakery and a bar running in old mortuaries locally. Anyway I digress.

Links to other old mortuary businesses in Plymouth

Make at 140 moved to its new location recently and now has the fabulous spaces at Ocean Studios in which Lizzie can run her courses. 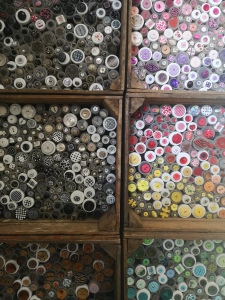 I did the beginners course. Our course was taught by Jackie, an enthusiastic teacher with five years experience of home sewing. My group of novices were a group of women ranging in sizes and ages. We were all pretty focussed on producing the two items being created during our five week course. The first, a tote bag, taught us basic pattern use and sewing machine skills. The first class also covered the anatomy and physiology of a sewing machine and the tools needed for a basic sewing kit.After the Tote bag we quickly progressed onto making an actual garment. We were really well supported by Jackie, who is endlessly patient and encouraging. Lizzie was also there every Tuesday , sometimes supporting other groups or classes but always there to make half time beverages, comestibles and to share her sewing wisdom. At the end of week five I had a strong and useful tote bag and a top that actually fitted me.

There are loads of follow-on courses to join but I decided to take some time out and make some mistakes at home before returning for advanced stuff later in the year. 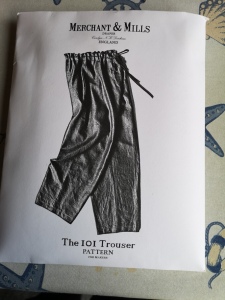 First up in my mistake plan list was a Merchant and Mills pattern, euphemistically called 101 Trousers. 101, has come to represent basic, simple or easy, but my take on 101 has always been more about George Orwell’s torture chamber in his novel 1984. As it turns out the trousers straddled these two meanings rather effectively. My big error was buying a fabric that was the same on both sides. Hannah my partner chose a lovely botanical fabric with a plain reverse side, she had a much easier time of it. My choice gave me ample experience using an unpicker.

On reflection the pattern probably was foolproof but we just took foolish to higher levels than it could accommodate. Eventually after using a months supply of the f**k word, copious tea and YouTube gazing we produced two lovely pairs of trousers, with pockets, that we will wear with pride in full daylight amongst people we know. That is high praise because we are a fussy pair.

I’m already planning my next garment on the mistake plan. I’m confident that my new found basic/ beginners skills will ease me towards less mistakes and more confident seamstressing and then on to the next course at Make at 140. For everything else there is YouTube .