There is a significance to the number of this blog. Come inside and I will explain.

In 100 blogs time I will have been pondering the pandemic for roughly a year. I say roughly because some days there was more than one blog and sometimes a subject took a few days to complete so the same number was used until I was done.

At the time of Pandemic Pondering #1, I had no idea of what was ahead of me, or indeed the rest of the world. #1 was ahead of the government imposed Lockdown in Britain because I was displaying symptoms of a virus and decided to self isolate. I had been unwell for much of March but believed it just to be a regular virus gifted by a toddler. As we have learned more about Covid 19 I do wonder if @theoldmortuary had actually grabbed ourselves an early version.

At the time I was practicing daily blogging, ready for a course with The Gentle Author.

Here I am just over 2/3 of the way through a year still waiting to attend the course and the Pandemic still giving me plenty to ponder about.

Some days write themselves and others need a little more effort to extrude. Dog walks are a great source of blogging material, beyond that the subjects or topics usually just reveal themselves during normal daily life, sometimes we seek things out because they might make a good blog. Meanwhile normal daily life goes on @theoldmortuary, 90% of it too humdrum for blogging.

I was always the sort of child that dreamed about keeping a daily diary. I never achieved it because I had always bored myself within a week. The same thing happened at various times in my life both with diaries and scrapbooks. I started blogging nearly three years ago because I wanted to regain my story telling skills; a career in the NHS prizes factual writing over whimsy. I also like to take photographs, sometimes they are quite random but most can be made useful in some way. In truth, blogging actually started when someone made a cutting and thoughtless remark to me about both writing and photography. Seething, I began blogging and the title could easily have been ‘ F**k You’

It has become a daily habit or ritual, blogging forces me to find something interesting in every day. Some days it has enabled me to concentrate on the positive when sadness and dismay were the actual truth of our lived experience. I am constantly learning and I should probably delete much of the last three years blogs on the grounds of badly written nonsense. Ponderings seem protected and will be excused any future cull because in my mind their mission statement to continue through the experience of this Pandemic makes them many pieces of a whole project.

I strongly suspect I will still be at this pondering malarkey in another 100 days, when @theoldmortuary hits 1 year of pondering. Thankyou for reading. Please close the doors on your way out. 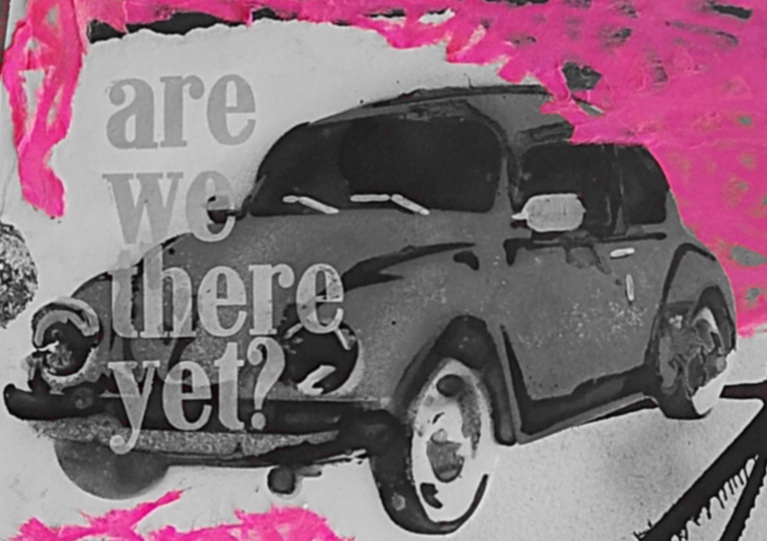 Palimpsest is one of my favourite visual experiences. I’ve written about it in a couple of blogs.

Originally the word described the effect of parchment being reused and the original script showing through the newly scribed text.

The contemporary use of the word applies to, a mostly urban , experience of Graffiti, street art , posters and stickers jostling for attention on walls and structures.

Tidying my studio recently has given us an almost parchment experience of Palimpsest.

We’ve started reusing an old familial blackboard as our shopping list. The blackboard has lost the ability to shrug off earlier messages. I could repaint it but I am charmed by the old messages butting-in to our current life. 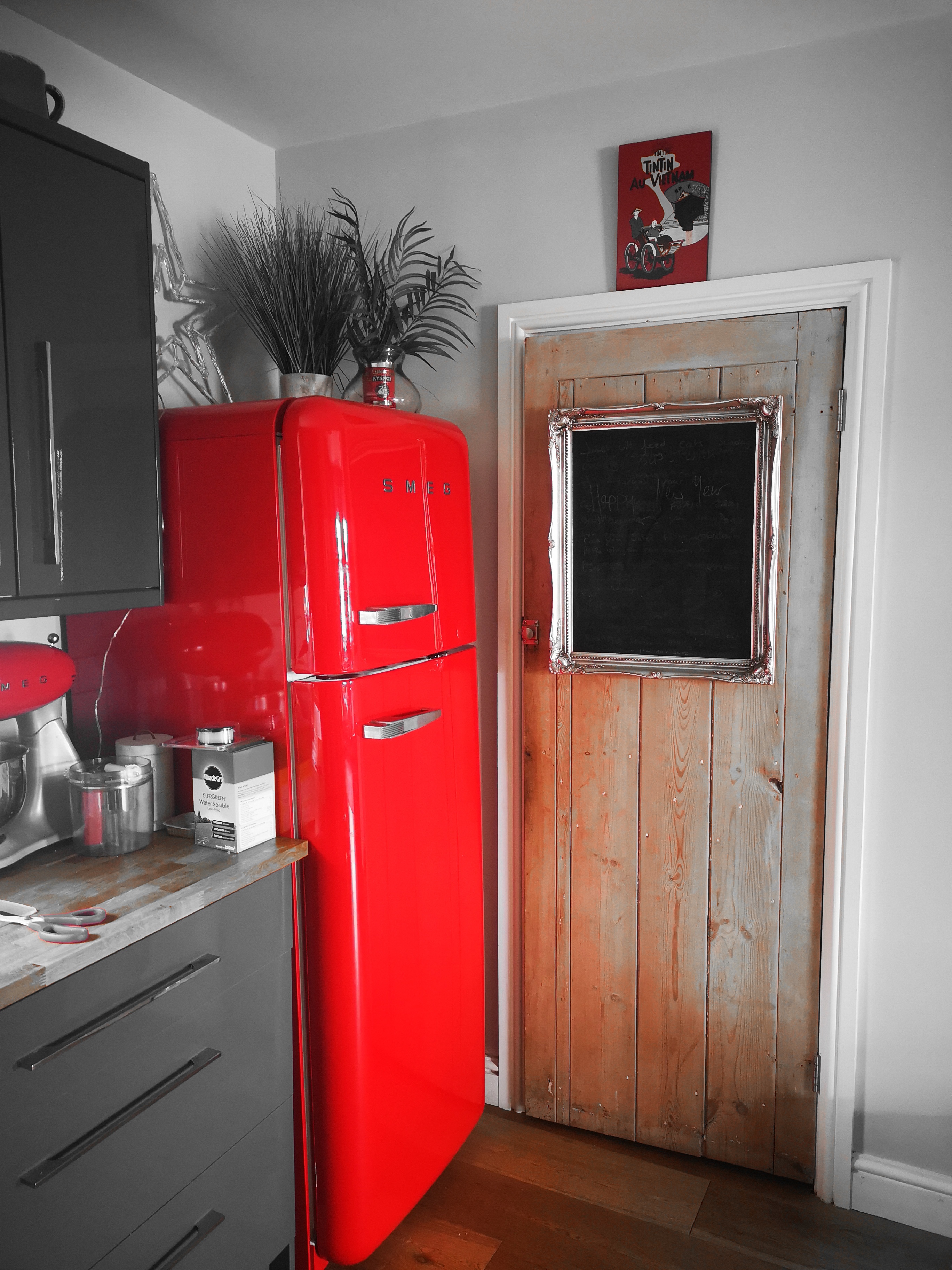 Tidying the studio also provided plenty of old work filed away, today I decided to put it to good use.

I’m not really certain where one person creating a work moves from Collage to Palimpsest.

Progress will be blogged.

Whenever I revisit palimpsest I do a search on WordPress to see if anyone else is talking about it. Today I found

Blogged on the 18th April, she was one month into quarantine.

Three months in Lockdown and reluctantly easing, my thoughts run in a similar way to hers.

Life in lockdown has been layered. There has been a lot of thinking time, too much sometimes. I’ve definitely gained many new skills, I’m fitter of body and my blogging muscles perform much better but the losses have been eviscerating. Despite social distancing I know more people now than I did in March.

The thinking space has definitely helped the negative aspects of the last three months and created some wonderful memories and perspectives.

There is also a tiny layer of guilt that while some jobs have been done there are a pesky few that we have been resistant to.

Creating Palimpsest in the studio is the best antidote to chore guilt. One little detail is a bit of a wish for a return to normality.

Grey rainy mornings have been a constant companion of 2020. Some days the subject for the daily pondering is obvious, other days nothing seems quite interesting enough, today, with the early rain, is one of those days. A quick skip through the image archive tempted me towards writing about rust, but ultimately one of the rust coloured images I retrieved pointed me the way of a saltier story. Baked goods, in particular the Cheese Straw. 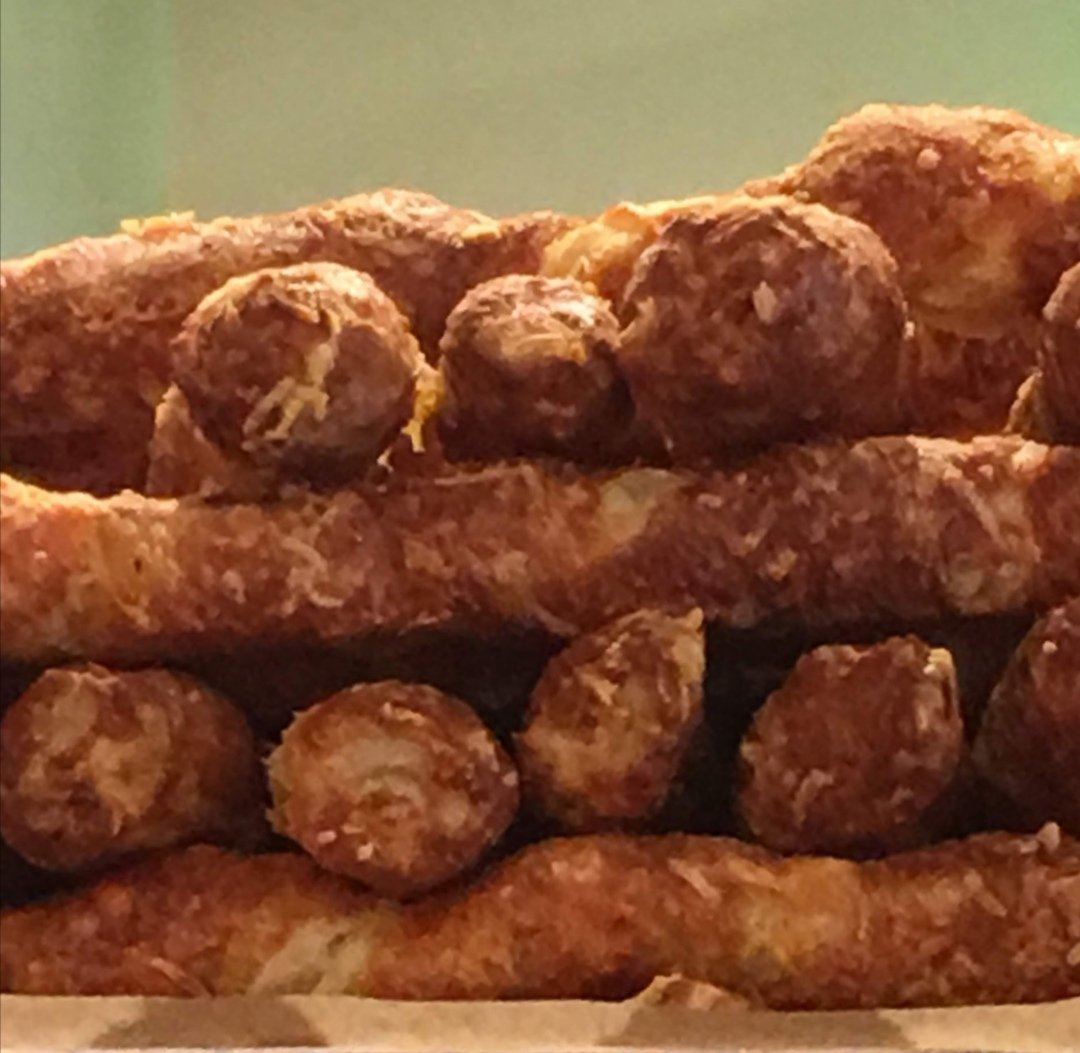 Starting at the top I present the Gail’s Cheese Straw made with Mature Cheddar Cheese and Comté. This tasty little pile photographed at Gail’s Dulwich VillageI have a long history with cheese straws. My mum used to make them with left over pastry. Hers were pale and flacid and only as tasty as the cheese she had laying in the fridge. On fancy days she made a ring shape of cheesy dough and enclosed three or four skinny cheese straws within the ring.A fellow blog writer has taken the time to write the history of the cheese straw. It’s a fascinating read on a rainy morning.
https://thehistoricfoodie.wordpress.com/2018/10/30/cheese-straws-a-quick-history/I loved these unsophisticated treats eaten warm after school. For much of my life they were the only cheese straw I knew, I make them myself with left over pastry.At some point in the Baking Renaissance of the 21st Century . Cheese Straws became bigger, puffier and altogether much tastier. 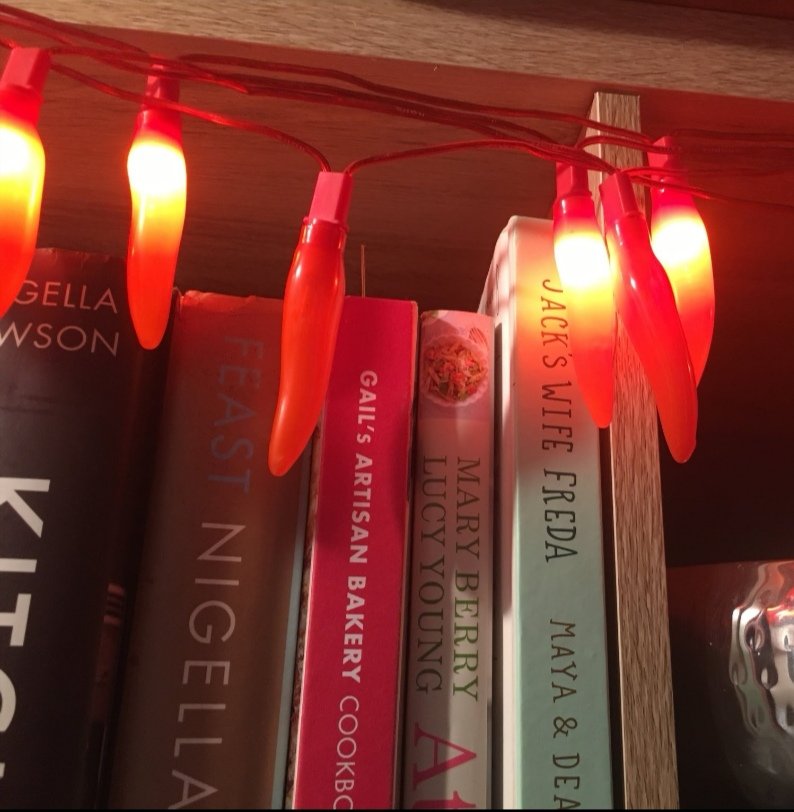 Armed with a Gail’s cookbook and a bit of creativity, cheese straws started to look a lot more fancy in my own kitchen.

I don’t know if people feel particularly passionate about cheese straws. I suspect they are overshadowed by prettier and sweeter ‘show stopper’ baked goods.But without the cheese straw would it’s savoury cousins, the bacon or sausage tasty even exist?

This was a weekend of passions colliding. I had enrolled in a blog writing course run by The Gentle Author who is known for his books and blog about Spitalfields. I don’t know how or when I discovered his blog but it has been a pleasurable daily habit for a long while.

By the greatest of personal serendipity the course was held in one of my favourite London cafes The Town House, Fournier Street.

I can only recommend reading https://spitalfieldslife.com to explain quite why I wanted to learn how to craft my own blog in his style . Similarly I don’t have the words to explain the subtle beauty of https://www.townhousespitalfields.com/ Make the time to go. I went for the first time some years ago during a Hugenot History Festival. I’ve been an irregular visitor ever since.

The Gentle Author attracted the most interesting group of people to his course, There was a group decision to keep details of the course unspecific on social media. Specifically though this was the loveliest group of people I’ve ever done a course with. The Gentle Author encouraged and extracted beautiful words and moments from us all, seemingly effortlessly. If I was shattered after two days of writing, extracting the best, oh so kindly from 14 of us must have been exhausting. The Gentle Author just kept finding writing nuggets right until the end, and then he went home to write a blog. We all went home with his book Mr Pussy tucked under our arms. Our cohort was such a lovely group of people, we are all keeping in touch to support and encourage on our blogging journeys

Our writing and thinking was fuelled with fabulous food by https://thegentlewoman.co.uk/library/leila-mcalister and drinks by the cafe at TheTown House.

I’ve reproduced the details of the next course below. I am still fizzing, such a positive experience email spitalfieldslife@google.com

Spending time in Spitalfields is never just about one sensation. Obviously. There was a little time to take in the local vibe . Street Art is everywhere. My walk to and from the course takes me through some favourite streets.

London gives good Palimpsest is an earlier theoldmortuary blog and features some Spitalfields Street art. It takes so many forms, I found this sticker not far from Fournier Street on Sunday morning . The beauty of the street art here is the mix and overlaying of aesthetic and political art, obscured and damaged by flyers, stickers and random scrawls. She will be gone soon.

That, my friends, was a weekend very well spent.