Yesterday was unusual because I didn’t feel particularly inspired to write and was in the lucky position of having written two blogs in one day earlier in the Pandemic so had the chance to stay numerically correct . It is 14 days since Pandemic Ponderings started. I’m not sure what made me not want to write . We needed supplies so I drove the car to a farm for eggs and then hit two supermarkets for provisions. We went for another massive walk. In the same direction as #13 but the opposite riverbank.

The need to bake became imperative and a rich black Guinness Cake sits in the kitchen this morning, some of it already eaten.

In London Cornish Pasties were being made by my daughter and her boyfriend. 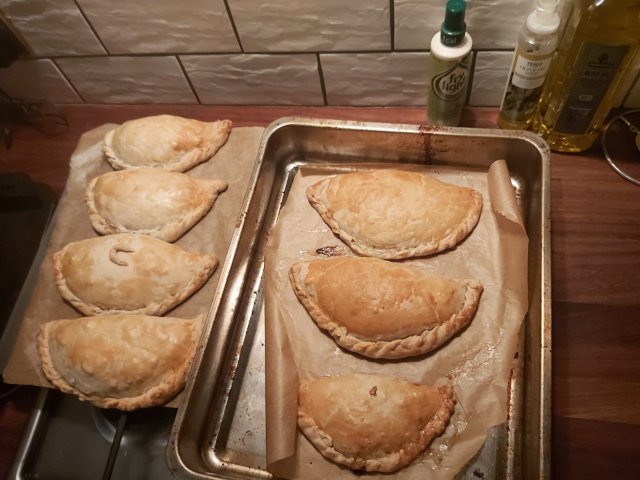 So there was a lot going on.

My mind was almost certainly taken up with thoughts that swirled around reregistration as a Radiographer. A decision made for me by the government.
It was a big decision to deregister when I left London two years ago. My long career in the NHS had accidentally gone full circle ending exactly where it started at St Bartholomew’s Hospital.

An injury in New York, I fell over a flower bed, had thrown up a number of health ssues I was unaware of and some that I had chosen to ignore. The pragmatic approach and slightly early retirement seemed the right answer to these problems. Which it was, the Health issues have righted themselves with rest, medication, weight loss and exercise.

Reregistration is usually bloody hard and involves crossing the government’s palm with Silver and donating time freely to the NHS to prove worthiness and usefulness.

As if by magic in a Pandemic, reregistration becomes easy, which makes me wonder why such apparently useful people have always been made to take a difficult path if they change their own minds.

No time to be churlish.

Both myself and Pandemic Ponderings will be taking a path unimaginable to me 14 days ago. Let’s see where serendipity is taking us tomorrow.