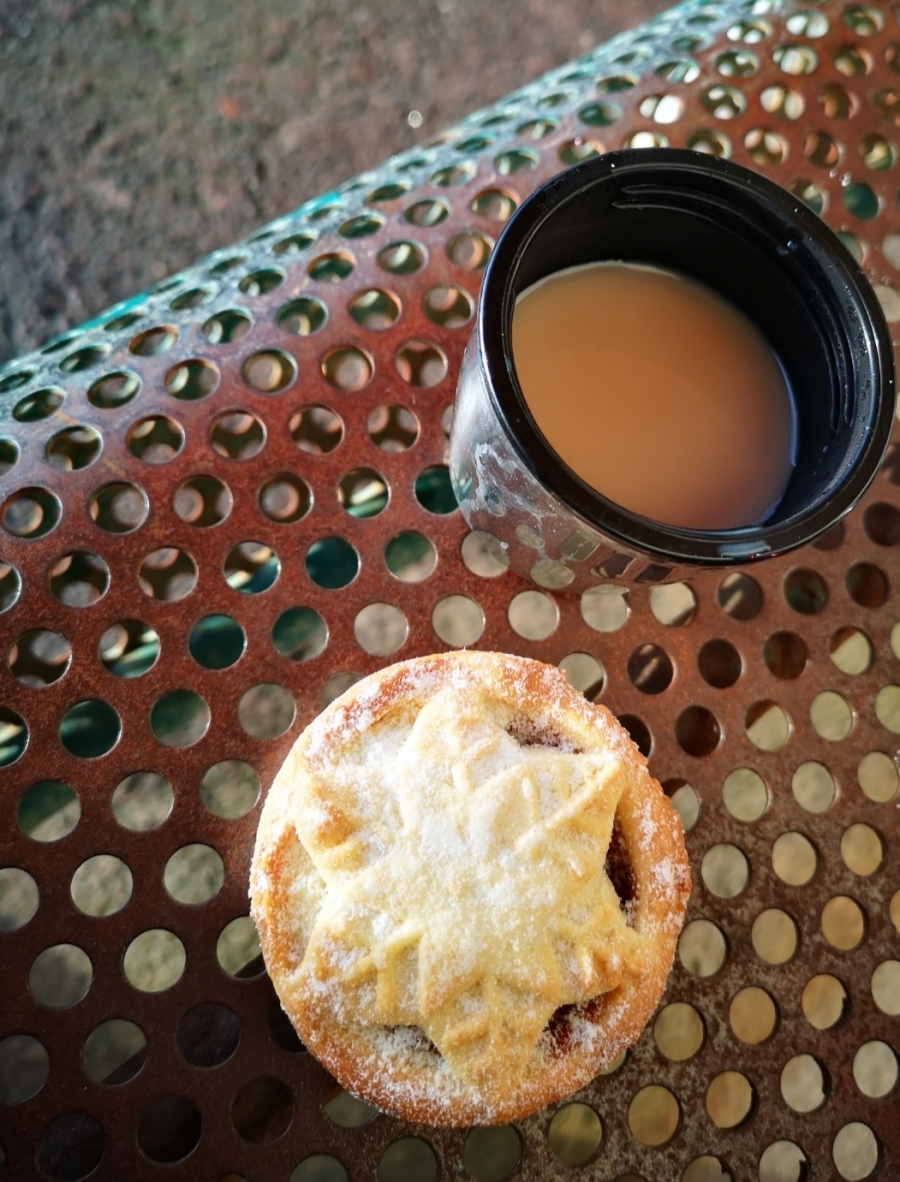 This is the start of a good day. A Christmas parcel, missing for 6 weeks turns up in Hong Kong. Miss VV checks the paperwork.

The box contained more than just the bee, just in case you think we are wicked people who wrapped up something small in a big box.

So by video we get to share the excitement of Christmas in January. And I get to think again about our Christmas Festival @theoldmortuary which looks set to run for a few months yet. Fake Christmas, or Christmas extended is causing some complications. Our ‘Bobbing’ friends are amused by constant Post swimming snacks of Mince Pies.

I groan at the thought of cooking the bargain turkey who is resting in the outside freezer. In early January a local farm advertised frozen turkeys for £20

I booked one and turned up to collect him. He was one huge turkey. Common sense should have pre warned me that the only left over turkeys in 2020 would be massive. Cold and slippy I wrestled the turkey to the car with the same style as I’ve used with drunken work colleagues on the tube, I rested him in the child seat at the back of the car and strapped him in. There were immediately two worries. Would he fit in the freezer.? He does but the only other thing we can get in there is the ice we bought for our non existent Christmas socialising. That was a couple of interesting days of culinary experimentation trying to eat the frozen foods evicted by the Daddy of Turkeys. Worry number two was can we get him in the oven to cook him?
This is a problem, we have no idea which cooker we will be using for Fake Christmas. It’s a worry but nothing a good swig of Christmas Advocaat can’t solve.

The last day of the old year and the last day of Merryneum. Tomorrow we will have the freshness and promise of a New Year. But first a dissapointment of the Merryneum. Not many gifts found their way to @theoldmortuary this year. Many have been held in a secure location until ‘ Fake Christmas’ being held sometime in the New Year. New Pyjamas though did reveal themselves on Christmas morning.Their patterns are the illustrations of this blog.

You would expect with all the free time created by not entertaining family and friends during the festive season we would have been able to have a designated Pyjama Day.

It has not happened! Dog walking and inclement weather have restricted the ability to have a day not wearing clothes. Dark mornings and afternoons permit pyjama dog walks but only if the weather is not wet and a substantial coat can cover up the evidence.

So to top off any lingering dissapointments that we may all have with 2020 , we need to add general disappointment with the weather over Christmas. A very British way to sign out.

Its been a funny old festive season @theoldmortuary . We have a smallish family circle and a larger circle of friends. We are very lucky. One Christmas lost to being decent citizens, who stuck to the rules, is not actually a ‘ lost’ Christmas just a diminished one without all our treasured people around us.

Today it is 360 days until Christmas 2021. Our strange distorted world will look very different.

And while it can never turn the full 360 degrees to return us to our pre-pandemic normal. ( We can’t ever turn back the clocks.) Things will look and feel very different 360 days from now. 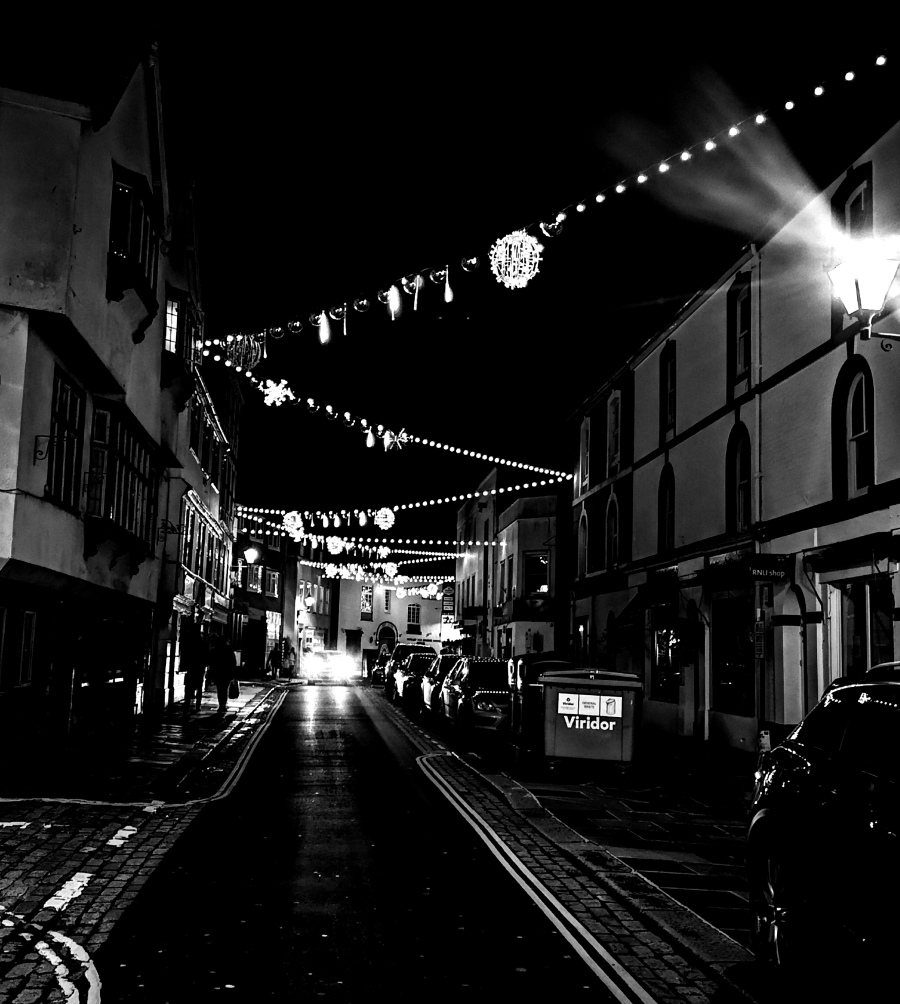 Merry Christmas, who needs a big blog on Christmas morning, probably no one . What we all need is our friends and family around us. The hurly burly of traditions all bound up with over crowded homes and too much food. What we have this year @theoldmortuary is the time to go and look at Christmas lights after last minute shopping.

And the chance to make home made cranberry sauce.

Very peaceful and lovely, but not normal. We love and miss our festive season regulars, the irregulars and those in other realms. Love to our families and friends far and wide. You light up our lives. 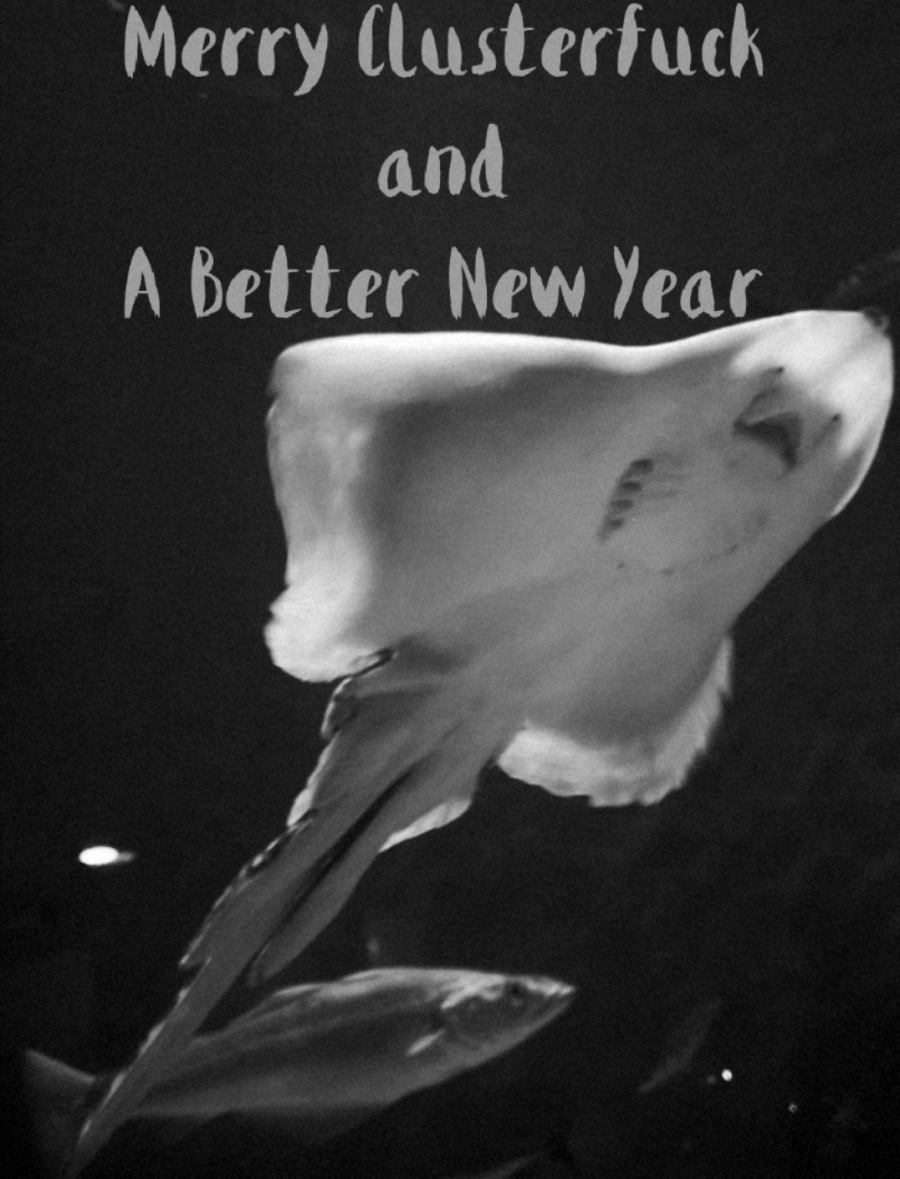 An unusual blog today, made up of a variety of things . A portmanteau blog if you like.

Our weekend had a plan that most definitely conformed to a usual pre-christmas weekend. Saturday started and finished with a watery theme.

It began well with some cold water bobbing.

In the evening we went to the National Marine Aquarium for a ‘Night at the Museum’ dining event which in itself was a curious piece of serendipity. The pictures we took will illustrate the rest of the blog.

We had been booked to attend this event at a different time of year but it was postponed until this weekend because of Covid-19. Our socially distanced dining area was in the room holding the Eddystone tank which is where the tenuous serendipity comes in.

In the morning we were swimming in Plymouth Sound above unseen sea creatures. In the evening we were dining surrounded by the same types of sea creatures that would have witnessed our flailing limbs from below. Not that I’m suggesting that ‘Bobbers’ swim to the Eddystone Rock, or in anyway disrupt sea lanes. We ‘ bob’ in the vicinity, quite a distant vicinity in reality and always with regard to the Sea Lanes. We are not the sort of sea swimmers who get mentioned in the Plymouth Evening Herald or are reprimanded by Harbour Masters or Port Admirals. I don’t think we even trouble seagulls.

In between these two events at 4:30pm Boris Johnson had delivered a monumental clusterfuck. Or Prime Ministers Briefing as it is officially known.

Without going into details, these can be found on any, far more reliable, news source. Christmas in Britain has been Clusterfucked.

This certainly affected the mood and ambience of our evening at the aquarium. We had plenty to talk about just trying to reset the logistics of a Bubble Christmas to the Clusterfuck variety. This may be the time to say that the food was great and being in an aquarium at night was wonderfully calming. The Rays were particularly meditative. We had a great evening.

Understandably, under the current circumstances, the streets of Plymouth, on our way to the Aquarium, were unusually quiet for the last Saturday before Christmas, as were some tanks at the aquarium.

The Sea Horses, our favourite exhibit, were missing.

Only time will tell if the Sea Horses and the good residents of Plymouth were spending their Saturday night doing the same thing. Officially the Sea Horses were ‘ away breeding’
It was a massive disappointment in a day inadvertantly filled with disappointments. I’ve been forced to design my own Christmas card. Exclusively revealed here!

A new Christmas Star combined with blue white lights , vaguely reminds me of the accepted depiction of the Coronovirus.

As a creative person, fond of flights of fancy, it is somewhat disappointing that, the much anticipated, vaccine is a clear fluid, all very clinical and reassuring, I’m sure. The magnitude of the job, though, surely requires something that resembles a potion, served in an old chemistry lab beaker and smoking with the addition of liquid nitrogen.

The imagined potion would be green, Lime green through to chartreusse. I’m not overthinking this at all! Well actually I am overthinking this, I’m keeping my eyes out for baubles in this exact shade of green to hang in the Christmas tree alongside the Covid Star for this year. A visual immunisation.

In future years we will unpack the baubles and wonder why anyone would choose baubles in such an unseasonal colour. I wonder if I should do a bulk order of Reindeers to grant my tree some ‘ Herd’ immunity?

I blame these short days, the long nights allow time for folkloric Ponderings of a meandering and pointless sort.

Baubles, bubbles and the rule of 6. Driving home for Christmas 2020.

December 2020 in Britain and we are all finalising our rule of 6 festive bubbles to celebrate Christmas. Driving Home for Christmas is going to be different and in many cases impossible this year.

Nothing to be done about it. We are just going to have to sparkle within a confined gathering. Except sparkling may not be exactly what we do. This weekend we ventured into a physical shop to buy some festive clothes. Like hybrid magpie/moles, in drag, we are normally drawn to sequins and velvet accesorised by high heels( briefly) for the festive season. This year we’ve plunged into the high tech world of thermal underwear and wicking layers all the better to enjoy our outdoor gatherings. The high heels forgotten in favour of walking boots. Flamboyance is not found in the aisles of the thermal underwear world. Sparkle on a personal level will be replaced by the gentle glow of a pair of women who have the double security of knowing that the vest that is tucked into their knickers has additional thermal qualities. Seasonal Security in a 2020 world of uncertainty. 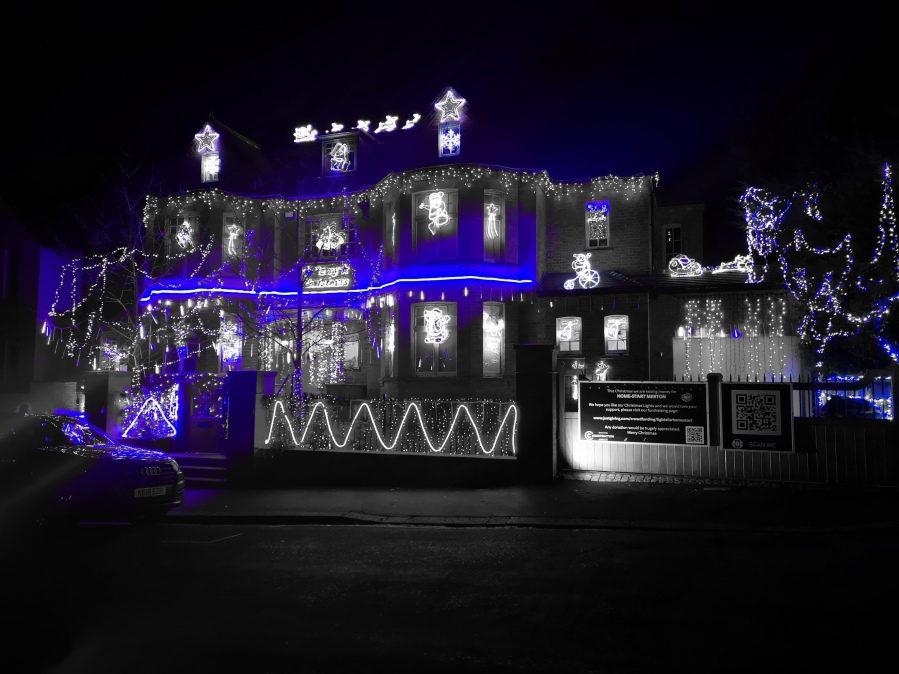 Another day, another dog walk.

We are really clocking up the footmiles this weekend. Fresh air and thermal underwear, the 2020 theme for buzzingly busy pre-christmas weekends. Except the buzz has been replaced by lateral conversations and an intimate knowledge of the state of neighbours illuminations.

Last night took in some luminous examples of house decorating and bush trimming. This one stands out because it has been done to raise funds for a charity and with all the ingenuity of a Covid world it is very easy to donate by following the instructions on a sign.

Donating is the easy bit, pondering rarely takes the easy bit. @theoldmortuary spent some time reading the charities web page while our feet throbbed from our pavement pounding. The work they do is significant and hugely important. The published case studies kept @theoldmortuary awake last night.

The United Kingdom is in a funny old place in this run up to Christmas. An apolitical truth is that none of this is the fault of anyone under 18. Christmas 2020 will put on a brave face but its midwinter, Stygian understory will be every bit as bleak as those Christmases of Dickens or Rossetti/Holst.

Those of us that are able should donate to charity, just like shopping, small and local is probably better than large and corporate.

For inspiring this blog.

In the UK there will be a Home Start somewhere close to you.