There has been a curious circularity to the week which has been radled by a virus. Mostly exhausted, I have also had some lovely, in person face to face but masked up and at a distance conversations and some zoom or Video meetings. Lovely Ralph wearing his daffodil was part of the Video gang, he didn’t really play an active part in the commitee meeting but he clearly is aiming to be Chairman with this fabulous pose of authority. After yesterdays blog with my photo of the resting bee, Ralphs’ mum sent me this picture with a rescued bee which she popped into a daffodil to recover his equilibrium.

The stand out theme of the week has been the non- Covid virus and its debilitating symptoms. It is on the wane now leaving me a bit bunged up and still without any taste or smell. My amnosmia and phantosmia are on going. I’ve given up cooking from scratch unless under supervision. Early in the week before I realised that I was more than just a little taste and smell impaired, a chilli dish that I produced caused quite a response in other people but for me the only response was the stinging of my gums. I am quite lucky that the phantosmia for me is not too negative. At its worst most foods taste slightly mildewy or just stale, but for the most part I taste nothing. It has been a great week for drinking all those unusual teas that seemed like a good idea in the supermarket, that then languish in the cupboard because they have all the allure of fresh urine. Last nights curried chicken was not strong enough to register anything, my gums remained un tingly and I thoroughly enjoyed what I thought I was eating which was fresh Mango.

My drink of choice has become ginger beer, the more gingery the better. Normally I can be a right lightweight with ginger beer but this weekend I will be heading to the Afro- Caribbean shops to buy virtual firewater. This is the hottest I managed to get in the west country. Depicted as a colour doodle.

Not a scintilla of heat in that! Talking of heat, I kept my phantosmia of burning wood and tar to myself whilst working at the museum, it really was better for everyone that way.

One more Ralph to send you on your way this Friday. I’ve not really been taking many pictures or been quite so out and about but whatsapp is a wonderful resource of other peoples pictures 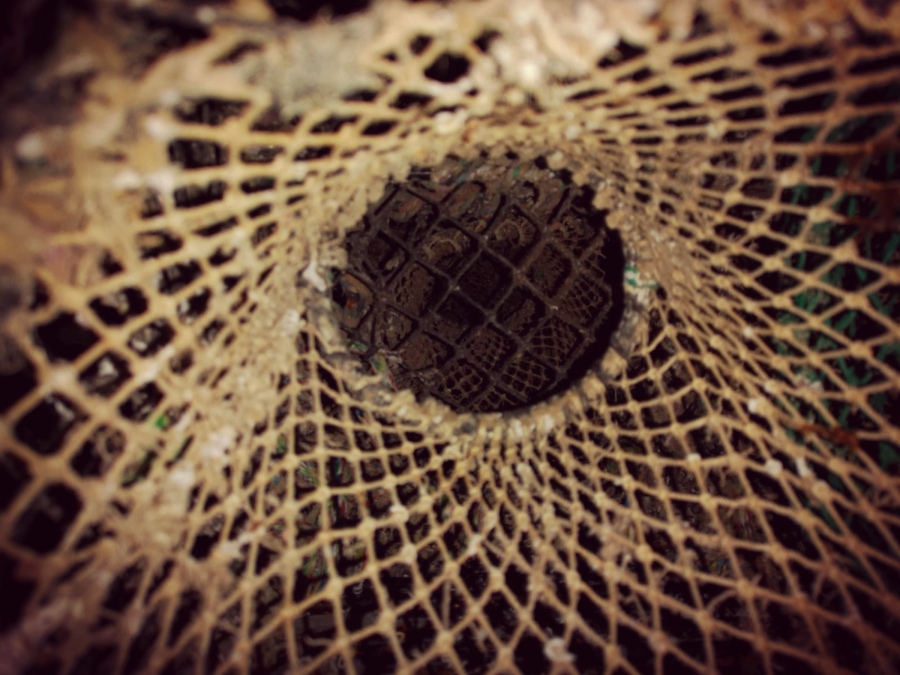 There is nothing more exciting for our dogs than a beach that is slightly damp and yielding to the paws. A beach where they can build up speed and go a little crazy without human intervention. January is the perfect month for such adventures. This picture was taken at the very end of a long walk, the dog footprints are there just for the joy. The human footprints have determination and purpose. The human footprints are heading towards coffee and cake in a favourite cafe.

The cafe was closed for refurbishments. The dogs continued with joy and the humans made compromises. Ultimately everyone was happy.

Which is more than can be said for any lobster who casually wanders into a lobster pot looking for a snack. 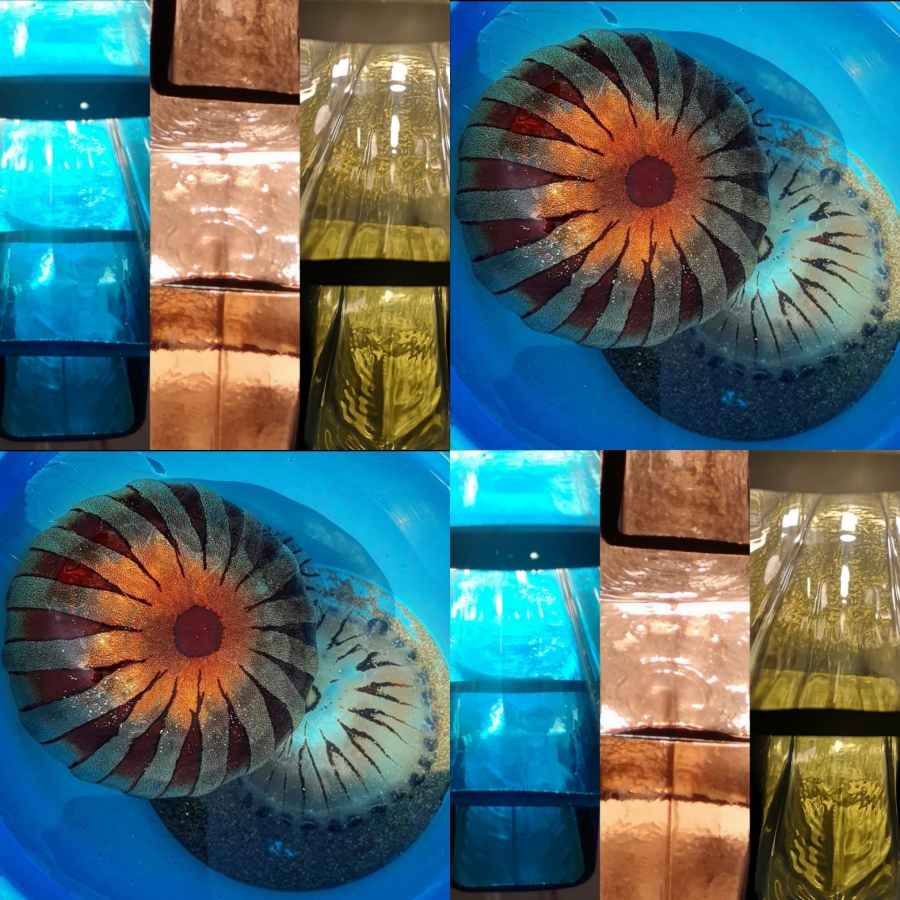 Today was a serendipitous colour concatenation. I spent some time peacefully in the beautiful space that is St Lukes, part of The Box museum. My two periods working in this space had moments with no visitors.

This particular installation will be leaving the museum soon so I took the chance and took some photos with no people about. I also took some close up photographs of the glass lights.

Imagine my happiness when a friend posted the picture below of Compass Jelly Fish captured briefly in a blue bucket.

The colours are identical. That’s this blog done. Colour happiness. 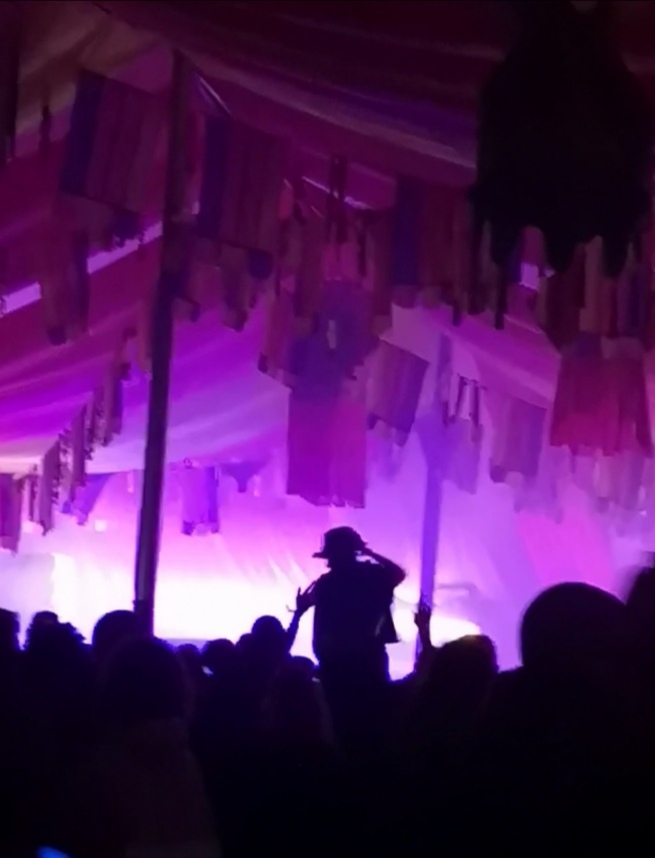 I love this image from a set yesterday. The colours give it the quality of an Old Master. Yesterday the fickle Covid fairy had once again been looking over my shoulder to see which acts I had ticked on my festival running list. And Ping! Just like that some of my selected acts were zapped by the test and trace app and unable to perform.

My location at the main stage last night pretty much sums up the weekend. We use What3words to relocate one another after the inevitable trips to the festival loos or food and drink consessions.

Offstage- self explanatory really, our chosen acts were off for Covid safety reasons.

Modifies- there is always something else at a festival. Yesterdays unplanned events included Joe Marler talking rugby and mens mental health and Steve Davis and Kavus Torabi talking Medical Grade Music. Which in turn led us to the Bollywood Stage at Camp Bestival just after midnight where we danced and had the surreal experience of watching drunk men mime a snooker match on a picnic blanket.

Sleep- an essential of Festival life.

Just like attending last Saturdays gorgeous wedding, this weeks festival has had us mingling with strangers, this time at a festival. Listening to people talk with real emotion when they describe their joy at our slow re-emergence into a more normal way of life and yet always reflecting on the losses and sadnesses that we have all experienced, appears to have given me my own version of Long Covid. My emotional carapace is not so tough. My eyes don’t normally ooze at weddings and certainly not at festivals. Every time someone makes a heartfelt soliloquy my newly sensitised and accesible soul makes my eyes sting and my heart feel a little sad. Just like Long Covid, I fear my sensitised carapace may be with me for some time.

Mindful of this feeling I tried to create an image of barely there festival goers to represent the millions for whom mingling with strangers is no longer an option at any venue at the festival of life.

The warmest day, so far, of the year and day 2 of a loosening of restrictions in England and I’m still following the protocol of the last few months and walking the dogs and staying local. Just like this rusty supermarket trolley I am adrift from the social buzz of being amongst my own kind. Thankfully unlike the trolley I have not spent the last few months in a muddy tributary. I have yet to put concatenation into practice.

In theory the rules say I ( we) can meet in groups of six in the great outdoors. What I have failed to do is build the next chain in the series and go significantly further afield or meet other people for a natter . Its not that I’ve lived the life of a recluse but I have grown to love the days of a familiar walk listening to a podcast and watching nature unfurl. Today I downloaded a whole months worth of podcasts. I’m actually unlikely to need them once my social butterfly emerges from my Pandemic induced Chrysalis stage.

Socialising has been restricted to Coffee queues followed by a walk, or swimming followed by shouted socialising while we scramble into clothes,forcing not quite dry skin into garments that feel two sizes too small.

I know that once concatenation takes hold and I embrace the sequential changes as they ease me into normal life, slowly link by link, there will be no stopping me. But I am going to miss having the time to notice the small things.